Several times in several different groups somebody has asked about the difference between "transgender" and "genderqueer" and "nonbinary" and then somebody else has posted something like this: 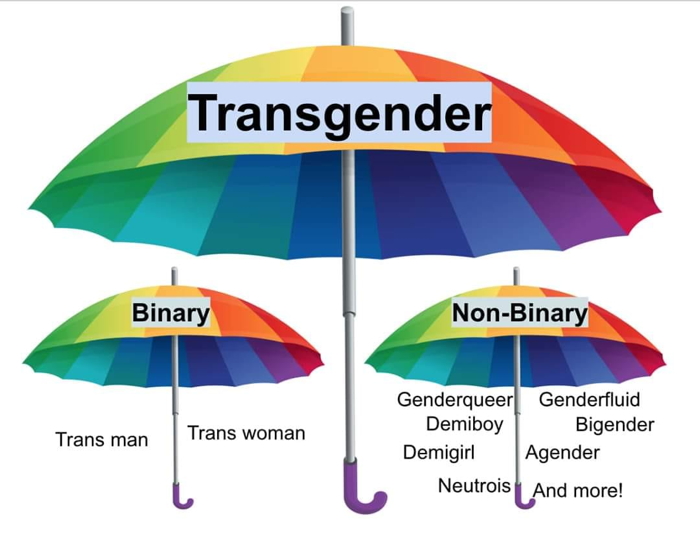 So what's my problem with it?

I identify as genderqueer and I do not identify as transgender, and that umbrella diagram sticks me into that category whether I like it or not. That diagram creates a hierarchy in which all genderqueer people are transgender (but not vice versa). That means that any statement that transgender people make on behalf of all trans people is going to be considered to apply to me and other people like me. Because we're defined as being under that umbrella.

Let's look at some of the broad all-inclusive statements that many transgender people have made, shall we?

Well, that one is wonderful, I'm totally on-board with that! It used to be that society's understanding of what it meant to be trans was that you went out and got yourself a medical transition to make your physical anatomy correspond with your gender identity. And that certainly didn't describe me! So this is a good change, a good shift. The problem is with additional assumptions and assertions that they very often attach to that, such as

b) A person's physical anatomy is not a polite topic of consideration. Anatomy is utterly irrelevant to identity and nobody's business. It's totally inappropriate to be identifying a person on the basis of what's inside their underpants

d) Any insistence that sex and gender are two different things is politically offensive and based on wrong out-of-date science that is now disproven. There's no such thing as "biological sex" because intersex people exist and there are multitudes of body variation from chromosomes to organ structures, so the binary is just a social construct and there is no physical sex.

Well, let's unpack some of that. (Because we don't all wear the same packers in here, okay?) In reverse order, my intersex-activist buddies do want to make a distinction between sex and gender. It's important to them and they're tired of "intersex" being used as an argument for why "biological sex doesn't exist" and otherwise ignored. Intersex people have bodies. They have bodies that other people found embarrassingly different. So embarrassing that they often coercively assigned their bodies to male or female with a surgeon's knife, without their consent. Intersex people can't discuss the fact that their body differed at birth from the body of either male people or female people if "male" refers to gender identity instead of physical sex. Intersex people can't identify themselves if people in society are confused and say things like "Oh me too, I've always had a female side, I wanted to dance ballet instead of play baseball". I'm not intersex myself, but I can't even explain that I'm not intersex if the language doesn't let me explain that although I was never a boy or man, my physical configuration wasn't unusual for male people. That it's my gender that's queer, that my sex falls into normative classifications.

I identify as a femme or girl. But unlike Teresa, my transgender sister, I would not be misgendered if you called me male. Teresa would be; she'd find it insulting and demeaning. She identifies as a woman and definitely female. But I'm not Teresa. I identify as male. I identify as femme or girl. My sex and my gender don't match. I'm genderqueer. And if you're going to raise a giant umbrella over my head and say we're all transgender, you can't go around making blanket statements that support Teresa's identity but erase mine.

If it is no longer necessary to "pass", to look like a typical cisgender person of your same gender, then it should not matter if people do make some guesses about what's inside my underwear. Because no matter what's in there, we already agreed that it doesn't invalidate my gender identity, right? So it doesn't have to be kept a shameful secret. I've got the anatomy that most directly caused my mom's obstetrician to designate me as "male". It's an unfortunate social fact that the same anatomy also caused my birth announcements to incorrectly tell everyone "It's a boy!", but the "male" part wasn't wrong and I have no reason to hide it. I was a male girl. Perfectly queer and not typical, and quite healthy and happy with that, thank you.

I propose this umbrella instead: 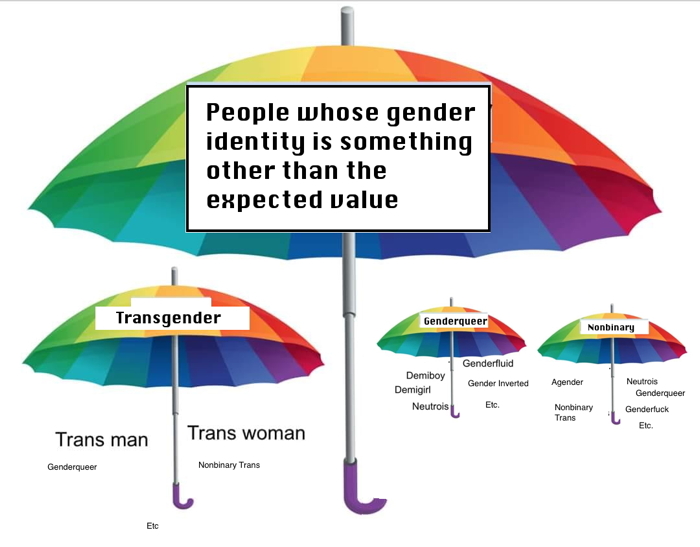 Notice that under this umbrella, several terms appear in multiple places. Because some genderqueer people do identify as transgender, whereas some do not; similarly some nonbinary people identify as transgender and others do not, and some nonbinary people consider themselves genderqueer while others do not, and vice versa and so on.

You're secluded in quarantine, and all the performances and events have been cancelled, so it's a good time to read a book!

My book, GenderQueer: A Story From a Different Closet, has been published by Sunstone Press. It is available on Amazon and Barnes & Noble in paperback and ebook, and as ebook only from Apple, Kobo, and directly from Sunstone Press themselves.

This DreamWidth blog is echoed on LiveJournal, WordPress, and Blogger. Please friend/link me from any of those environments on which you have an account.


Index of all Blog Posts